We have collaborated on a review on “Enzyme Mimics for the Catalytic Generation of Nitric Oxide from Endogenous Prodrugs” which has been published in Small.

The highly diverse biological roles of nitric oxide (NO) in both physiological and pathophysiological processes have prompted great interest in the use of NO as a therapeutic agent in various biomedical applications. NO can exert either protective or deleterious effects depending on its concentration and the location where it is delivered or generated. This double‐edged attribute, together with the short half‐life of NO in biological systems, poses a major challenge to the realization of the full therapeutic potential of this molecule. Controlled release strategies show an admirable degree of precision with regard to the spatiotemporal dosing of NO but are disadvantaged by the finite NO deliverable payload. In turn, enzyme‐prodrug therapy techniques afford enhanced deliverable payload but are troubled by the inherent low stability of natural enzymes, as well as the requirement to control pharmacokinetics for the exogenous prodrugs. The past decade has seen the advent of a new paradigm in controlled delivery of NO, namely localized bioconversion of the endogenous prodrugs of NO, specifically by enzyme mimics. These early developments are presented, successes of this strategy are highlighted, and possible future work on this avenue of research is critically discussed. 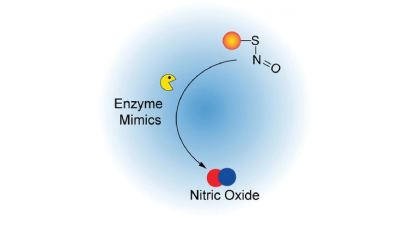