Our work “Combatting implant-associated biofilms through localized drug synthesis” has been recently published in the Journal of Controlled Release.

Bacterial contamination of implantable biomaterials is a significant socioeconomic and healthcare burden. Indeed, bacterial colonization of implants after surgery has a high rate of incidence whereas concurrent prophylaxis using systemic antibiotics has limited clinical success. In this work, we develop enzyme-prodrug therapy (EPT) to prevent and to treat bacteria at interfaces. Towards the overall goal, novel prodrugs for fluoroquinolone antibiotics were developed on a privileged glucuronide scaffold. Whereas carbamoyl prodrugs were not stable and not suitable for EPT, glucuronides containing self-immolative linker between glucuronic acid masking group and the antibiotic were stable in solution and readily underwent bioconversion in the presence of β-glucuronidase. Surface coatings for model biomaterials were engineered using sequential polymer deposition technique. Resulting coatings afforded fast prodrug conversion and mediated antibacterial measures against planktonic species as evidenced by pronounced zone of bacterial growth inhibition around the biomaterial surface. These biomaterials coupled with the glucuronide prodrugs also effectively combatted bacteria within established biofilms and also successfully prevented bacterial colonization of the surface. To our knowledge, this is the first report of EPT engineered to the surface of biomaterials to mediate antibacterial measures 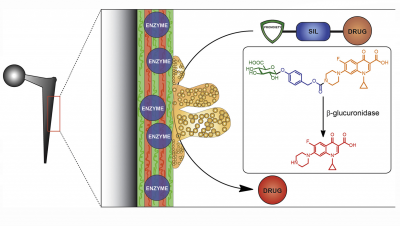